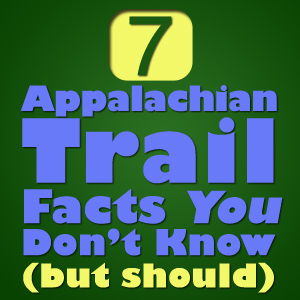 The title for today’s post is derived from the things that I’ve learned during my preparation (H) for the Appalachian Trail.  It’s very possible you already knew all seven of these facts.  I just didn’t think, “7 things you already knew” was as grabby.

I know present to you:

7 Appalachian Trail Facts You Probably Don’t Know (but should)

1)  How Does One Poop on The Appalachian Trail?

Other than soiling themselves, a good plan B is to carry a trowel to dig a small hole in the dirt so other animals don’t accidentally step in it whenthey are pooping.  Just so you know, animals don’t dig holes.  A double standard if you ask me.  They also don’t wipe.  Triple standard?

2)  How Does One Shower on the Appalachian Trail? –

The same way that hippies do.  You don’t.  “But you’re spending all day walking up and down mountains, while carrying 30 lbs. on your back, through the heart of the summer!  Surely you’ll excrete several oceans of sweat everyday.”  Yup.  That’s part of the trail, is being a grummy bastard.  Currently I average approximately 1.8 showers a day (I like to sing).  You do, however, get to shower when you get into towns while staying at hotels, hostels, motels, friends’ places, etc.  In other words, if you’re reading this, and live anywhere remotely close to the trail, and would like to let two scummy dudes de-stank in your abode, we will shower you with love (and stank).

3)  How Does One eat on the Appalachian Trail?

On average, you’re only 4-5 days away from a trail town, which means, on average, you will be carrying 4-5 days worth of food on your back.  As for pure logistics, there are a combination of approaches thru-hikers take to feed themselves.  One– buy supplies when in town.  Two– mail yourself goods ahead of time or have loved ones do this for you.  Three– cannibalism.  I’m sure after a few days of granola and peanut butter and John will start to look like a double decker taco supreme.  I feel comfortable saying this only because I know he will feel the same way.  I am delicious.

4)  How Does One Drink on the Appalachian Trail?

Obviously, much like food, you will re-stock when you can in town.  Water, however, is much more important than food.  The human body can go days without food (I’ve already run this self experiment a few times). It can go only a few minutes without water (don’t fact check that please).  Because of this, an active hiker should be consuming approximately 3 liters of water everyday.  One liter of water weighs about 2.2 lbs. x 3 liters per day x 5 days = 33 extra lbs.  Not happening.  So – instead hikers opt to either treat reservoir water chemically, or run it through a filtration system.  John and I are opting for the former as the potential health risks of chemicals pails in comparison to extra work and increased risk of human error associated with using a device we don’t understand.  It was only yesterday that I learned, in fact, gnats are not indicators of clean drinking water.  Baby steps. Beer is still consumed the same way you normally would – with a smile.

5)  How Does One Protect Themselves From Bears on the Appalachian Trail?

Kung Fu.  For those who aren’t Chuck Norris, it turns out, that bears really aren’t that big of a problem.  Relative to Grizzlies, Black Bears are passivists.  As long as campers are careful to not put food in their tent at night, bears are much more interested in going about their daily business of being adorable and losing NFC Championship games.

6)  How Does One Protect Themselves From Lyme Disease on the Appalachian Trail?

I hate this question almost as much as I hate reality TV (nothing will ever top reality TV hate).  Deer Ticks are common carriers of Lyme Disease.  Because Deer Ticks are so small, about the size of a “fleck of black pepper“, constant self-inspection is necessary to make sure one of these micro-bastards isn’t in the process of transmitting murder sauce into your bloodstream.  And because of this, instead of the magnificent red beard I have promised so many, I will have no choice but to shave whenever possible to make this self-inspection process easier and more thorough.  I will also be buzzing my head as often as possible, but it’s less red, so the associated sadness is lessened.  I can’t wait to punch a Deer Tick right in the face. 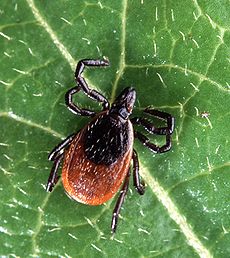 7)  How Does One Dry Out Wet Clothing While on the Appalachian Trail?

Obviously during the day, you can pin your wet clothes to your bag and let the Sun do its thing (that’s the Sun’s primary thing).  At night, the moon tends to be far less helpful in this regard.  Putting on wet clothing in the morning is enough to turn a nun into a serial killer.  Luckily, AT hikers are a crafty group.  They discovered that by stuffing your wet clothes in your sleeping bag with you at night, because a sleeping human body is essentially a mini-furnace, your clothes will be dry come dawn.  That also means your nastiness is what’s doing the drying, thus compounding the stank factor mentioned above. 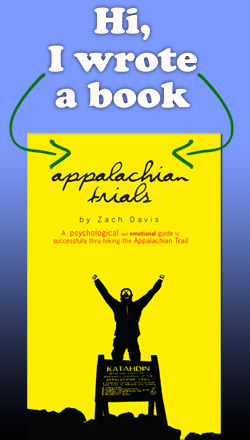