Why Cat’s are Glorified Invisible Friends

Growing up, I had the best friend any little boy could ask for.  His name was Wesley, and he was awesome.  Wesley and I were inseparable.  When I would play Nintendo, Wesley was there.  When I would play Sega, Wesley was there.  When I would play Gameboy, Wesley was there.  I’m not sure if it’s because I was so great or because he was such a good friend, but I would always win.  It didn’t matter what the game was, he always seemed to come up short in the end.  See, when I lose, I’m a really poor sport.  I tend to flip the monopoly board, accuse the other person of cheating, deal a passive aggressive insult, and storm away.  Not Wesley.  Usually after losing, he would go out of his way to compliment me, even if it wasn’t relevant to the situation.  “Good job winning in basketball, you’re really handsome”, “It’s hard to beat you in Donkey Kong because you’re a genius” or, “Oh man, you beat me in a dead sprint up the stairs again, you should be president.”  Wesley and I were total BFFs.

Then one day, everything changed….

After I beat Wesley in another arm wrestling contest (I let him use both hands this time), we started getting ready for our first day of kindergarten class.  As could be expected, I was nervous.  I even told Wesley my plans of running away from home.  Like always, he was able to settle my nerves.  “The Good Badger,” Wesley protested, “you’ve got nothing to worry about.  All of these new kids will love you.  You’re factually the greatest person on Earth, and if anyone doesn’t agree, I’ll beat them into an oblivion,” (Wesley had quite a temper, not to mention vocabulary, for a 5 year old).  And then it happened…

My mom walked into my room, and concernedly said, “hunny, I know you’re nervous for your first day of school….but your friend Wesley,” she hesitated, “well, he isn’t real.  Either Wesley dies, and you go to kindergarten, or Wesley lives and you go to the orphanage.”

Just because none of the above ever actually happened, is not all that important.   The takeaway point is that kids do invent invisible friends.  Eventually society (or a parent threatening adoption) teaches them that visible friends are the only accepted variety.  One way or another, invisible friends die.

Some people are pet people.  This is the person who happily volunteers to watch your dog when you go out of town because it will keep their other 48 animals company.  Other people, are not.  This is the person who can’t help but see a fur coat with a tongue when looking at a golden retriever.  I fall in the middle.  I grew up with dogs, I like dogs, but feel no desire to have one myself.  I’m not willing to trade companionship for constantly cleaning up sh*t.

With that said, I could understand why someone would want one.

When I used to say things like, “Wesley wants to eat at Applebees,” people would naturally assume that I was insane.   Invisible people aren’t allowed to have taste preferences (plus no one likes Applebees).

Well then, why on earth do people give their cats personalities? Here’s a template for every cat I’ve ever been introduced to:

Cat Lover: Ohhh you haven’t met my cat!?  You have to meet my cat!  I know what you’re thinking, cats suck, but my cat is different.”

(Cat stops walking, makes direct eye contact only to say, “I hear you, I don’t care”)

Why is it that I had to murder Wesley and Cat Lover is allowed to pretend like that their cat has any personality.  When all cats have the same personality, it’s not longer personable. 95% of cat’s personalities can be summarized by “they hate people”.   There’s a reason crazy ladies surround themselves with cats– they need members for their board meetings.

I’ve constructed a Venn Diagram to illustrate the differences between Mr. Flufferton and Wesley. 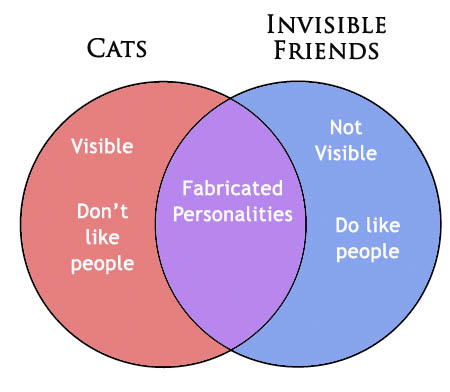 I know that people like cats.  I just don’t get it.  I never have.  Without proper convincing, I don’t think I ever will.

And then just when I was ready to call up my mass species extermination squad (a team of 12 human wrecking balls dubbed Crush Limbaugh) this video fell into my lap.

Damn that was satisfying.