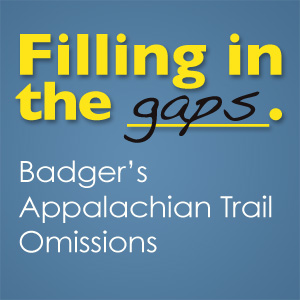 For those who’ve followed my Appalachian Trail journey from the beginning, you may have noticed a couple of gaps in the story.  This has been confirmed by many of the questions I’ve received via Facebook and e-mail.

As I’m currently in the process of writing a pretty kick ass Appalachian Trail book for you all (subscribe to the Badger Book list for more info), I have been reaching into the depths of my honesty bank to best portray some of the mental challenges I dealt with during my journey.  I am doing this in hopes of offering learning lessons to help future thru-hikers successfully complete the AT.  The learning lessons themselves will be in the book, not the posts.

The following are re-worked excerpts from the (currently unnamed) book.   They should serve to bridge a couple of the biggest gaps in my story.

Two weeks before leaving for the AT, I had managed to score a phone interview with a company I had dreamt of working for over the better part of the last decade, Google.

I vividly remember 30 minutes of pacing back and forth in my bedroom while nervously giving my response to the question of “what I would do differently if I were CEO of Google.” After hanging up the phone, I felt less than confident in my performance. I was two weeks away from living outdoors; I wasn’t exactly in the right state of mind to talk business strategy.

I departed for the trail, two more weeks go by and still no response from Google.  I had given up hope of hearing back, which was both a disappointment and a relief.  I could now focus solely on my hike.  Of course just when I had mentally throw in the towel, I received an e-mail from the recruiter saying that I had passed the phone interview and that Google wanted to fly me to San Francisco to interview at their headquarters in Mountain View.  HOT. DIGGITY. DAMN .

I exchanged e-mails with the recruiter for another three weeks while trying to coordinate where I could get to a town that offered shuttle service to a nearby airport.  Most of the towns along the AT are no bigger than a few hundred people- not exactly mass-transit hubs.  Furthermore, trying to predict when you’ll arrive to a particular destination while still two hundred miles away is a guessing game at best.  Terrain, weather, and day-to-day energy level are all variables in constant flux.   This was no easy task.  If it were any other company, I would have politely declined.  This was Google.  I had no choice but to follow through.

Eventually I remembered that a friend from college, Mitch, has a sister, Jill, who lives in Damascus, VA.  Because Jill wins the nicest person on earth award, she offered to drive me to the Tri-Cities airport in Tennessee about an hour away.

My abbreviated trip to San Francisco was nothing shy of surreal.  I had been living in the woods for over a month at this point.  I was now driving a rental car around a city I had never been to while mentally gearing myself up for the biggest interview of my life- which I was greatly under-prepared for.  Because the only clothes in my possession were my trail garments, I met up with a friend from college, Brandon, who now lives in San Francisco to arrange my borrowing his suit.  I drive back to the luxury hotel Google had set me up with, and immediately pass out in my king size bed.

I wake up after my first full night’s sleep in a long time and dedicate the next couple of hours to catch up on all the major technology news I had missed over the previous five weeks.  I showered, pounded a cup of coffee, and began my drive out to “The Googleplex” (Google’s headquarters).

As I shut the door to the rental car, I got one last glimpse from the reflection of the car window.  Homeless clown was the first thing that came to mind.  To say that the suit I had borrowed fit awkwardly was putting it lightly.  Brandon is 6’2’’.   I am 5’11’’.  I looked like an eight year old who had broken into his dad’s closet to play dress up.  Additionally, because my already wide feet had flattened out an additional size from losing the arches in my feet while on the trail, there was a zero percent chance of my fitting into his shoes.  I had no choice but to rock my bright blue Hi-Tec cross trainers.   Add a month of fantastic beard growth, and you have correctly envisioned the homeless clown.

A very casually dressed guy in his early 30s strolled out, looked around the room and said, “Zachary Davis?”  I stood up, shook his hand, and was escorted back to a large conference room over looking a nicely landscaped grass hill where many of the Google employees retreat to during their break.

Four individual 30-minute interviews flew by in an instant.   Some of my answers felt pretty good.   Some were laughably bad.  I walked out feeling like I had just finished a 15 round prizefight, got back into my car and start driving back to the airport while trying to process what had just happened.  Although a month in the woods had drastically settled my nerves, the business portion of my brain must have been covered in Snickers residue. Bluntly put , I was calmly delivering unimpressive answers.

I returned to Damascus the very next day and immediately got back onto the trail.  I had all but given up hopes for getting a job at Google. “Now I can finally focus on my hike,” I told myself to ease the anticipated pain of receiving the bad news from the recruiter.

Three more weeks go by. I get an e-mail from the recruiter asking to give him a call the next time I’m in town. I was in town and of course call him immediately. “Zach- I just wanted to let you know that the feedback I received from this end was excellent.  Congratulations – you have passed the face-to-face interview.”

I was in disbelief. No way was this happening.  I was in the midst of the biggest adventure of my life, and had just found out that I had all but received a job offer from the company I would gladly sell my soul to work for.  My spirits settled softly somewhere in the stratosphere. “All we have to do is submit your application to the hiring committee and we’ll finish the details from there,” the recruiter added.

The next opportunity to get to a computer and complete the lengthy Google application wasn’t until I arrived to the Holiday Inn in Daleville, VA, another couple hundred miles north of where I had received the good news.  The computer I was working with was either one of the first 15 machines ever built or had fallen victim to every computer virus.  I could have finished the rest of the trail in the time it took to open Microsoft Word.  Either way – I gathered together all the required pieces and sent it off to the recruiter.

Over the course of the next two weeks, my mind bounced between the trail and San Francisco, mostly favoring the latter.   I was planning what part of town I wanted to live in, how I was going to get my possessions across the country, and which of my friends I could coax out with me.  When it came up in conversation, I was quick to boast of the job waiting for me on the other end of the trail.  I texted those closest to me and let them know where I was landing in October.  What seemed like an impossibility was now my reality.

The next contact I received from Google was the following e-mail from the recruiter:

“Apologies for my delay, I was in meetings all afternoon. I did hear back from the hiring committee earlier today and unfortunately, I don’t have good news.

They did not approve your application and as a result, we are not able to make you a formal offer at present time.

I don’t have any specific feedback, as they don’t share this with us regarding hiring decisions.

I know this can be frustrating and I’m happy to schedule a call for early next week if you would like to discuss in more detail.”

I re-read the e-mail 15 more times to make sure I wasn’t misunderstanding something. Unfortunately I had read it correctly.

Wait…what!? I had passed both interview rounds, and now I’m getting turned down?  This must be some sort of sick joke.  To add insult to injury, I don’t even know why I was being turned down (still to this day).

The entire Google interview process began prior to my leaving for the Appalachian Trail.  I got that news in Harper’s Ferry, approximately half way through my trek.  I had spent the first half of my hike grasping onto at least the slim hope that I had a job with Google waiting for me on the other end.

That’s how the story ends.  Unfortunately there was no Disney ending.  This movie concludes with Mufasa’s death.  The Google fiasco, compiled with the health issues you will soon read about in part two do, however, offer valuable learning lessons.  The trail tested me.  I passed.  I want to share the answer key.