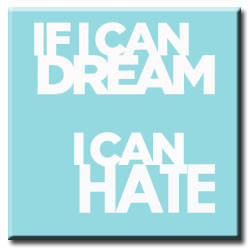 Today Hulu launched their new concept reality television series, dubbed If I Can Dream.  The concept goes: five complete strangers will be living in a house in Hollywood under the constant surveillance of several cameras (50 to be exact) set up throughout their home, monitoring their actions 24/7.  If you’re thinking this sounds a lot like Big Brother, you’re right.  These 5 individuals share the heavily eclectic aspirations of becoming a musician, an actress, an actor, another actress, and a model.  If you’re thinking this sounds a lot like The Real World, you’re right.  To add a twist of new media and a healthy dose of creativity to the mix, these five twenty-somethings (am I allowed to say that as a 24-year-old?) will be actively working in conjunction with Facebook, Twitter, and MySpace (whatever that is) accounts.  What that means is, you can Tweet actress one asking her to wave to the camera, put more corn in the salsa, or give actress two a wet willy, and there’s a Twitter’s chance that she’ll do it in your honor.

I’m probably not the right person to be giving a review of any reality TV show, given a long history of disdain, but since this incorporates new media, I feel I’m more qualified to review the show and concept.  The concept is truly intriguing.  It’s  like The Sims in that you’re dedicating your free time to witnessing others accomplish mundane tasks.  The downside is you have no control over what’s happening.  On the upside, they’re real humans (well at least to the extent that anyone in Hollywood is real).   Additionally, you get to be one of 50,000 guys asking the Brazilian model on a date through Facebook.

As much as I knock the concept, I think it has potential.  You remember the movie, The Truman Show.  Truman Burbank was more than just a celebrity, he was a deity to his fans.  I know this because you don’t buy mouse pads of celebrities.  Imagine that scenario, only now the fans can make instant attempts at contact through a variety of social media tools.  I know what you’re saying, and yes, I do know what fiction means.  I also know that people love to interact with celebrities; Ashton Kutcher has more Twitter followers than Ireland has people.  Really.  I will say, the concept is a good one.

I will also say, the show, is total garbage.  The pilot episode (there are weekly 30 minute episodes, or “highlights”, on Hulu) was essentially a really bad episode of The Real World, which is already really bad by all by itself.  The steaming version of the show, seen at IfICanDream.com, has a similar effect on your brain as huffing paint.  I tried to watch it, but after 5 minutes I started feeling dizzy.  Imagine the non-scripted interaction of five malnourished (between the five of them, they maybe equal one Shaq), aspiring Hollywood stars, who’ve spent their entire lives squeaking by solely based on their appearances.  It sounds a lot like a kindergarten classroom, only quieter.

But my hating something doesn’t deem it unsuccessful (often it has the opposite effect).  With that said, my prediction says If I Can Dream will be a colossal failure.  Obviously there is an audience for the Real World type of programming.  Additionally, the novelty of the concept adds intrigue points.  Also, don’t overlook the effect of Hulu’s wide reach and heavy advertising.  However, I think the market  for a new idea like this, is the early-adopter, web-savvy crowd.  And frankly, they’re too smart to enjoy this.