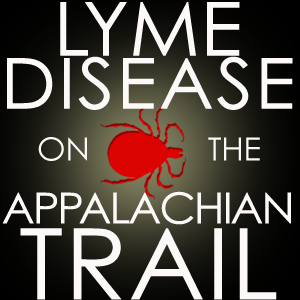 Here’s why Lyme Disease is a big risk to Appalachian Trail thru-hikers– these early stage symptoms, minus depression, are also common symptoms of long distance backpacking.  If a hiker assumed they had Lyme Disease every time they experienced stiff joints or fatigue, they would be hypochondriacs.   Even the common bulls-eye rash, as it turns out, is not always the case.  An infected tick bite can result in a variety of different rash patterns, including no rash at all.  In other words, the only symptom of Lyme Disease that deviates from the normal side effects of backpacking isn’t even all that reliable.

Deer ticks can range in size from a “fleck of black pepper” (in the nymph stage) to roughly half the circumference of a dime (adult asshole).  If removed quickly (usually less than 24-48 hours), there is little risk of the disease being transmitted.  Finding a brownish half dime on your skin shouldn’t be all that challenging.  Here’s the problem- people are far more likely to contract the disease from the nymphs.  That’s right, the fleck of black pepper is the more dangerous of the two.  Furthermore, these bastards are programmed to find the dark, moist parts of your body- the difficult to check regions.  Pardon my bluntness- but examining your taint after a 20+ mile strenuous hike is as un-fun as it is uncomfortable as it is disgusting.

In just the narrow observation of my thru-hike, I heard of at least eight cases of people getting off the trail due to Lyme Disease.  Two people that I spent a significant time hiking with, Road Dog and Wildcat, didn’t find out that they contracted the disease until after getting off the trail (one is now symptom free, the other is still battling nerve damage, headaches, and blurred vision).  I can only imagine how many hikers received this bad news upon returning home (I was dealt a sweet dish of West Nile Virus instead).

The quantitative analysis backs up my qualitative claims.  In 2009, there were 29,959 reported cases of Lyme Disease (420,000 when including the estimated unreported cases as well).  That’s up 69% from 2000.  And to remove any sense of reassurance for the future, 2012 is projected to “the worst year for Lyme disease risk ever.”

Granted, these numbers are national figures.  You’re likely wondering, “How does this pertain to the Appalachian Trail?”

Not that you need it, but here’s a map of the Appalachian Trail: 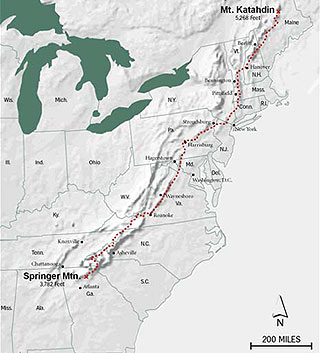 Now let’s look at a map of the reported cases of Lyme Disease (source: hvceo.org): 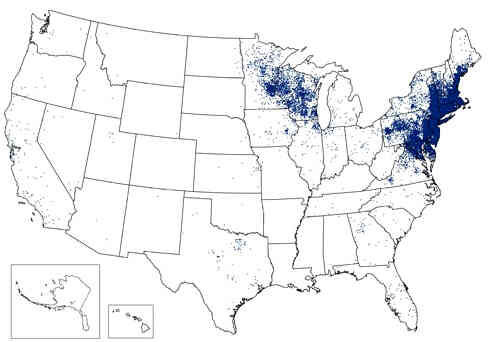 You’d think the trail was designed by deer ticks themselves.

The purpose of this post is not to dissuade you from hiking the Appalachian Trail.  All things considered the AT is still an education in living life the right way.  I just want you to be cognizant of the risks.  Ignorance is not bliss. Ignorance is Lyme Disease.  Lyme Disease can be a miserable bitch.  Knowledge is prevention.  Opt for knowledge.

Before reaching the northern half of Virginia, get some Permethrin (a tick repellent for your clothes), which stays active even after a few washes (and up to six weeks).  Get a few bottles and have it sent every 4-5 weeks upon reaching the deer-tick heavy regions.  These containers are typically too big to carry, so spray the shit out of your clothes and then pass onto other thru-hikers.  You’re saving their life.  Be sure to remind them this when mom sends them cookies.

Wear pants and long-sleeves. This is more of a do as I say, not as I do sort of thing.  I wore pants while hiking for a total of 14 minutes in five months.  I’m a super sweaty bastard so pants in the Pennsylvania summer would have made as much sense as shorts in Antarctica.  Either way it’s up to you, but keep in mind that ticks can only suck what they can grab onto, and they’re not going to grab onto pants soaked in Permethrin.

DEET.  Sure DEET has been shown to cause neurotoxicity, kidney and liver problems, and birth defects, but damn is it good at keeping bugs away.  Of course, I am being facetious.  I used DEET a lot on the trail, and I can say that it does do a good job of making you less attractive to insects.  It also does a good job of making you feel like hot garbage.  The times where I applied multiple rounds of DEET in a day, or used it a few days in a row, I would always start to feel uneasy- slightly nauseous, a headache, and occasionally dizzy.  My DEET recommendation: use it sparingly.  If you are going to follow the above advice and wear pants/long-sleeves, apply DEET only on the days where you need a shorts/t-shirt reprieve.

Check yourself everyday: Because a tick has to be attached for 36 hours before the bacteria starts to spread into your blood stream, the single greatest precaution you can take against contracting Lyme Disease is to meticulously check yourself every day.  I know I already eluded to this being a pain in the ass.  It is.  But you know what’s even more of a pain in the ass?  Permanent nerve damage.

If you’re interested in furthering your Lyme Disease paranoia, the below documentary, Under Our Skin, will accomplish exactly that.  In all sincerity, I highly recommend this documentary.  Watch it.  Today.

(And seriously, check out Appalachian Trials.)