Which state along the Appalachian Trail accounts for the greatest number of miles?

Of the 2,181 miles that make up the Appalachian Trail, Virginia claims 550 of these, just over one quarter of the entire trail. And for this reason, in addition to the repetitive scenery throughout the state, the term Virginia Blues is commonly used to describe the situation whereby a hiker experiences an emotional low- an unusually long stretch of diminished spirits while passing through the Old Dominion.

The Virginia Blues were something I spent a good deal of energy worrying about prior to leaving for the trail. How would I handle 550 miles of repetition? If playing the same song over and over again is a tactic used against POWs, would this stretch cause a similar bout of insanity? A large portion of people who drop off the trail do so in Virginia. Would I fall into this group?

It looks like I’ve answered that question: hell no.

Granted I still have 250 miles of Virginia remaining, but in my humble opinion, the concept of the Virginia Blues has nothing to do with scenery…

When first embarking on the trail, everything about the adventure is exciting. It’s new. It’s invigorating. Even the hard times, although challenging, supply an element of surprise. You always come away from the experience feeling stronger than you did before. What doesn’t kill you, makes you stronger.

By the time a hiker has reached Virginia, he/she has already set up his/her tent in heavy hail, slept through rapid lightning storms, gone extended stretches without a shower or clean clothes, and most likely dumped a half flask of whiskey all over the bottom of his pack (The Bourbon Blues), multiple times. The setbacks are beginning to lose their subtle charm.

And although the views from the mountain tops are every bit as beautiful, they too have entered into the routine. What once was breath taking, now seems to just make you short on breath.

I came prepared for this. I’ve had my fair share of extended adventures in the past: from studying in London to moving to San Diego while knowing no one. If you’ve been in a long term relationship, gone away to school, or started a new job, you’ve likely experienced this feeling yourself. Eventually the initial excitement fades. It’s human nature.

Those who attribute their blues to the state of Virginia, are misplacing the blame. Although there is some truth to the expression “the green tunnel” which describes the thick overhang of dense tree coverage throughout much of the state, Virginia is not significantly more repetitive than any of the scenery in Georgia, North Carolina, or Tennessee. McAfee Knob/Dragon’s Tooth (near Catawba, VA) has been one of the best day hikes on the trail thus far. A couple weeks ago, I got to hang out with wild ponies for Christ’s Sake. PONIES!! If that gives you the blues, then we can never be friends. 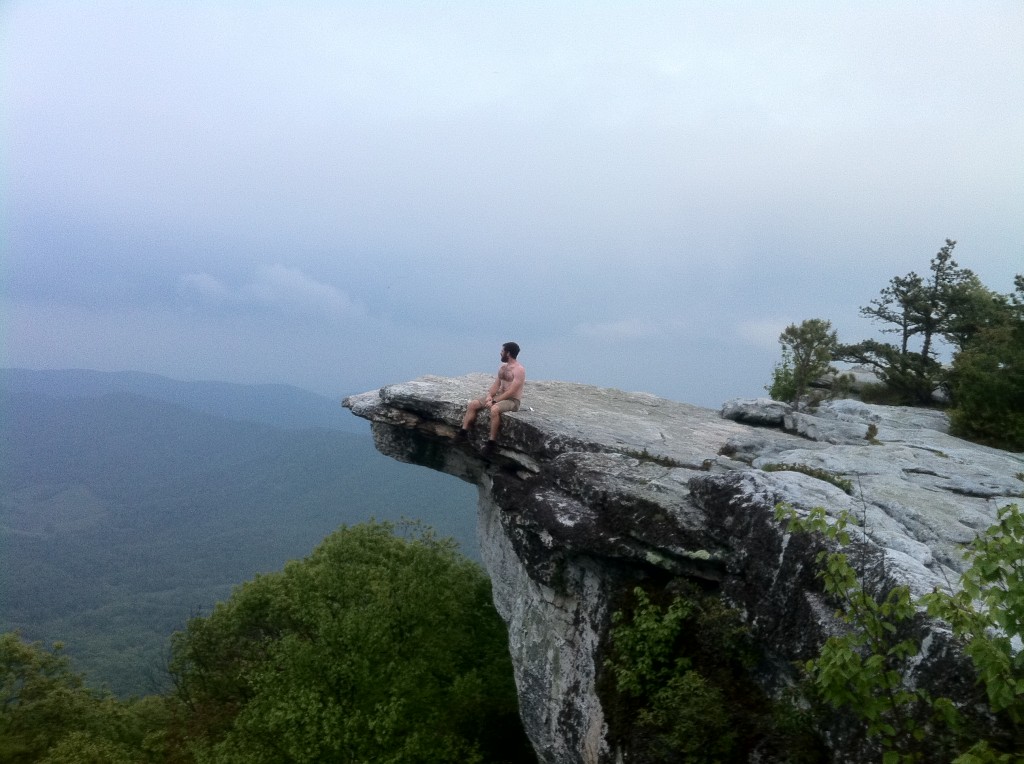 So what can an aspiring thru-hiker do to avoid these so called Virginia Blues? I don’t know if there’s one way to answer that, but this is what has helped me:

Every time the trail begins to feel routine or lacking stimulation, I think about what my alternative would be: sixty hour work weeks, undue stress, and the realization that my free time would likely be spent on a long hike. Quickly perspective is regained, the smile returns, and the temporary cloud of routine is lifted. If that doesn’t work, I meditate, I write, I listen to an audiobook (or the new Fleet Foxes album – so good). If that doesn’t work I get my ass to town and watch a few hours of bad tv, eat some bad food, and observe the many depressed people that populate these towns*.   (*please see comments below)