Jeff was desperately fighting the river’s powerful current, saw in one hand, the other raised in the air to maintain balance to avoid falling back in. The exhaustion on his face was obvious. After what he had just been through, you couldn’t blame him.

As Jeff pulled himself up on to the river’s bank, I noticed a large series of cuts just below his right knee.

Jeff: Breathing rapidly, “hold on, I need to shotgun a beer first.”

This was alarming. Not because Jeff doesn’t normally drink, but because he doesn’t normally require chugging a beer prior to telling a story. Jeff is the sort of guy who can keep a smile and steady heartbeat while swimming next to a great white shark. This was the first time I had seen him even slightly rattled.

Me: A little more anxiously, “so, what happened?!”

I was not so patiently waiting on the river bank on the other side of the bend for the first canoe to maneuver through what had been dubbed, the left turn from hell. We had approached some rapids set up in such a challenging configuration that an expert kayak’er would have had trouble navigating. A couple of 17 foot canoes operated by three novices and one Jeff, was a whole other level of intimidating.

Jeff: “So,” still panting heavily, “after Road Dog grabbed our boat to direct us through the first rapid, our canoe quickly got turned backwards. It wasn’t long before the current slammed us into the first big rock. Road Dog tried to grab the boat and reorient us, but I yelled for him to let go out of fear of the canoe snapping.”

“The way the boat was pinned, our canoe quickly began taking in a lot of water. After the boat sank down to the river’s floor, the canoe dislodged from the rock, both of us still inside, trying to paddle to safety. Within seconds, we slammed into another rock, this time shooting us out of the boat. We got up and tried to chase after the canoe, which eventually snagged on a downed tree further down the river.”

Me: In near disbelief, “is everyone alright?”

Jeff: “Well, Road Dog lost a Croc and cut up his foot on the rock bed trying to chase us down. Whoop too lost a Croc, also his glasses and trekking poles. All of his stuff is soaked. He’s assessing the damage now.”

Me: “What about that ridiculous cut on your leg?”

Jeff: “That? Oh yeah, the saw got caught on my leg. It looks worse than it is.”

Me: Yeah, well it looks bad. So now what?

Aquablazing is the terminology used when Appalachian Trail thru-hikers canoe or kayak a portion of the trail’s length. It’s most commonly done through the Shenandoah River, just to the west of the Shenandoah National Park, a very beautiful stretch of the trail in northern Virginia.

I had gone into our mini-excursion expecting our 70 mile aquablaze to be a relaxing couple of days off. Man was I wrong.

Jeff, as I’ve eluded to in the past, is a highly experienced outdoorsman. He makes all of his own gear, camps in the woods during business trips, he even has an entire room in his house dedicated to stockpiling his equipment. He’s hiked and boated every square inch of northern Virginia. Well nearly every inch…

Turns out the stretch of the South River was a portion he had yet to embark down himself, thus his excitement to coordinate our aqua-adventure carried a little more meaning to him. Whoop, Road Dog, and I were unaware of this fact going into the trip. It wasn’t until the second downed tree in the river in which Jeff had to either physically saw down himself, or we had to pull the boats onshore and carry our belongings around the obstacle, did someone think to ask: “so…Jeff, when’s the last time you canoed through here?”

Jeff: “I haven’t. But I Google Mapped it the other day. We should be good.”

Well, we wanted an adventure…

Me: “Wait…” completely stone-faced, “what? Is there no other way through here?”

Jeff: “Well, I noticed a path through the woods behind us earlier….I wonder how far off the nearest road is….”

Turns out the nearest road was only about 200 yards behind us. Instead of reproducing the sequel to Titanic, we carried the hundreds of pounds of gear to the road, and back down to the other side under a bridge where Whoop was sorting through all of his very wet belongings. Jeff and Whoop had the (mis)fortune of being the Guiney Pig (misspell pun) in this tragedy.

Whoop definitely got the worst of the spill. Because most of his belongings were in his pack, which spent ample time under water getting slammed against rocks, everything he owned was wet. This included cell phone, guide books, food, first aid kit, etc.

To ease Whoop’s misery, the very next day, first thing in the morning, Road Dog and Badger had their canoe swept into a strong current where a downed tree quickly flipped their boat and also soaked all of their belongings. It just wouldn’t have been right otherwise.

Ruined gear aside, Aquablazing was a major win. I heavily recommend it to any future thru-hikers.

Just be sure to Google Map your course first. 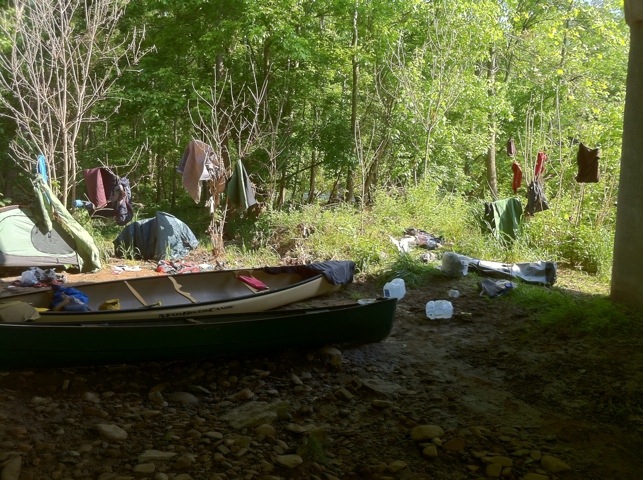 During the following video, you will laugh.

According to our Appalachian Trail guide book, there’s a campground known as the ‘Captain’s” which is basically some former thru-hiker’s backyard. Amongst hikers, it is common knowledge that he intentionally leaves a fridge full of grape and orange soda out on his patio for hikers to enjoy. There’s one caveat, you have to cross a zipline across a river to get there….

When we approach what we assume is the zipline, it appears as though the transport unit is stuck on the other side of the river.

In no mood to be denied a delicious orange soda, Whoop sees the zipline and decides to cross it Navy Seal style to the other side of the river (another hiker has this video and it has been debated that it’s just as, if not funnier than the following – I hope to get this for you soon).

After getting to the other side of the river, it turns out, there is no soda (the “Captains” was actually another quarter mile away). At this point Whoop(s) has already exerted all of his energy and decides to ford the river instead. Hilarity ensues.

Without further ado, I present to you:

Thanks to John for being a good sport about his hilarity.