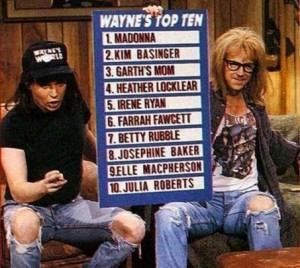 We are nation of ADD/ADHD beings.  We like microblogging sites such as Twitter because anything longer than 140 characters is a homework assignment.  In fact, there’s a pretty good chance you’ve already given up reading this post, probably somewhere in the ADHD to the microblogging range.  With so much information at our disposal, it’s no wonder we’ve developed mechanisms to try and filter out the fluff.  Nowhere is this more apparent than the abundance of lists available online.  Every site that you see has a “7 Fastest Ways to Lose Weight“, “The Top 4 Worst Best Man Speeches“, “The 15 Creepiest Vintage Ads of All Time” or the “Top 100 Chuck Norris Facts” (this actually exists).

As a service to you, I now present, the 4 Reasons Why We Like Lists:

If I were to write a non-list post about why people enjoy lists, chances are after reading, you’d be able to recite a couple of the reasons, and maybe one of the ridiculous links.  Most likely, you’d skim through the text, try to grab what was valuable and then breeze through the parts where I reference my own personal life, like that one time where I…..

By incorporating a list two things are accomplished (a list within a list): 1) You give the reader a simple outline of the message you’re attempting to convey 2) You let the reader know how many important items your message consists of.   In other words you let the reader know which pieces are most valuable, and how many to remember.  A list helps to organize larger context into a structure that’s similar to how our brains will store the information.

Attempting to explain why we like lists so much is like trying to describe why anyone ever enjoyed LOLcatz, The Pet Rock, Carlos Mencia, Reality TV, Vin Diesel, Second Life, or Bon Jovi.  People are dumb.  Assuming that complex answers can be broken down into a simple numerical construct is a cheap attempt to get your attention and more often, your cash.  If I’ve got a proven money making method, which book are you going to buy: “How to Become Wealthy with Rigorous Research, Long Hours, High Financial Risk, and Patience,” or “6 Simple Steps to Earning 7 Figures”?  These two books could consist of the same exact text differing only in their titles, and book # 1 wouldn’t sell 10 copies while book # 2 could land on the NY Times top 10.  People want to hold onto the hope whereby great achievements can be broken down into few easy-to-follow steps, so other people, smarter people, take advantage of this.  Everyone is aware of the 2 step program to lose weight: 1) eat better, 2) exercise more.  Unfortunately, this requires self control and patience.  I think I’ll go with the 10-day grapefruit and mustard diet instead.

3) For the Sake of Argument

This applies especially to any and every sports list ever created.  Fox Sports Best Damn Top 50 shows have made a living off of this.  To rank historical sports plays in order of importance only accomplishes giving overweight middle aged guys something to fight about in a bar (other than every other possible topic).  It’s clear people who indulge in watching sports have no qualms with wasting time, so when there are no live sporting events to be seen, we fill the void with discussing the arbitrary value of these moments.

Ranking the United States’ safest cities may contain some value, there are objective ways to evaluate safety.  Ranking the World’s sexiest male, is bred solely on the attempt to rob 5 minutes from your life.  If Adam Morrison can get a girlfriend, then  sex appeal is a very, very, very subjective thing.

4) To Build a Common Reality

Although this seems to contradict the previous reason, I don’t see them to be entirely mutually exclusive.

Remember way back in 1996 when MTV used to actually play music?  Seriously, it happened.  I remember every year, on New Years Eve, they would count down the top 100 music videos of the year.  Since MTV was the preeminent music video network, you didn’t really question their year in review rankings (either that or I was less skeptical as an 11-year-old).  Come January 1st, you knew that “Teen Spirit” was the music video of the year, and you moved on with your life.  Whether you take these rankings to be as concrete and factual as I did or not, it’s hard to deny the effect that an expert’s review has on all of our reality.  Simply being nominated for the Best Picture of the Year by the Academy Awards raises the movie’s perceived value through time, while a movie that just missed the cut might fade into the background.

We are creatures who feel uncomfortable with ambiguity; we demand understanding.  While award shows such as the Oscars might seem like a gala built for Hollywood’s mega-egos to swell, in reality, it’s as much for the person sitting on his couch, waiting with baited breath to see which foreign film that he’s never seen, walk away with a miniature golden statue.  Why?  Because up until that moment, all that exists is a cluster of critically acclaimed movies.  Immediately proceeding, there’s an unveiling of who/what is the best.  Our uncertainty is remedied.

Unless you knew someone on Schindler’s List, or the America’s Most Wanted List, the next time you encounter this arbitrary ranking system, or checklist, try to take it for what it’s worth – not much.  But if you’ve gotten this far, you already learned that…