In my previous post, I laid out the “how to“ portion of my “moving to San Diego” series.  The following will serve as the “why”. The previous post also included a sense of humility and an understanding that San Diego is not a one-size-fit-all city.  This post will be having none of that.

If forced to describe the Good Badger in 3 words, the general consensus would undoubtedly arrive at: noble, nimble, and ninjitsu (click that).  I bring this up simply to point out that “embellishing” is not one of those terms.  I pride myself in being a fact-spewing truthbot. So, when I make a claim such as, “San Diego makes every other city in the Universe look like Detroit”, you know that it’s as good as encyclopedic.

Likely you’re already aware that San Diego has great weather, nice beaches, good looking people, etc.  I’m not here to restate the obvious.  Instead the below will serve as 3 (and a half)  “outside the box” reasons

Why You Need To Move To San Diego

Yes, I just used cost of living as the top reason in selling you on San Diego.  No, I do not smoke crack (very often).

Everything you know about Southern California says that the cost of living is just short of being a wallet vacuum.  Gas is an extra 20%, and mass transit leaves a lot to be desired.  A beach-side shack will likely do more damage to your bank account than a house with two car garage in many Midwestern suburbs.  Paying $6 for a Miller Lite for most is nauseating, to San Diegons, it’s the norm.

And this is all absolutely true.  Commodities cost more out here than most of the country.

What many don’t consider, however, is what you aren’t paying for.

In 1995, more than 600 people died in Chicago due to extreme heat conditions.  Nearly all of these victims were either very poor, very old, or even more likely, both.  Most people in the area, however, were largely unaffected thanks to air conditioning, a luxury found in nearly every home.

A San Diegon is likely dumbfounded by two of the above facts: 1) the concept of “extreme heat” and 2) air conditioning inside of a house.

A home with A.C. in Southern California is the exception, not the rule.  Money, as you may have guessed, is not the issue.  Instead it’s a lack of necessity.  Three hundred and fifty five days out of the year, a gentle ocean breeze provides all the conditioned air anyone would require.  That leaves 10 afternoons where it’s legitimately uncomfortable during the day.  That’s when the beach instinct kicks in.

Not surprisingly the same situation occurs at the other end of the year as well.  More houses have heat than air conditioning, but its use is on par with that of a VCR in Silicon Valley.

Now, do me a favor…take a look at your wardrobe and tell me how many winter jackets, fur coats, gloves, hats, scarves, thermals, rain-proof anything, and snuggies you possess.  When you’re done ignoring this request, consider that these items (for the most part) aren’t even sold out here.  Not only only are you shopping for a total of 1.5 seasons (semi-summer & summer), but you’re eliminating the most expensive (not to mention crappiest) seasons altogether.

Next, tell me if you fit this description….You pay $40 a month for your gym membership and spend 80% of the time sweating bullets on a stationary machine between an anorexic mom and some guy whose aroma can only be compared to a dead man’s fart.  Believe it or not, but San Diego includes a complimentary gym membership.  It’s open 24 hours a day and comes with free tanning.  I’m sure you’ve heard of it – Outside. A flat screen TV and 360 degrees of mirrors  simply can’t compete with the Pacific Ocean and a palm tree studded park.  Not only will you avoid the dead man’s fart but your free membership also includes a lifetime’s supply of serenity.  Act now!

Lastly, for those of you living in an urban setting, estimate how much you spend on transportation simply to avoid exposure to sub-optimal conditions.  Whether it’s too hot, too cold, too rainy, too snowy, too hail-y, too lightning-y, too (insert angry act of nature), etc.,  taking a cab even 6 blocks away becomes easy to justify.  Nature will very seldomly force you into a cab out here.

The list could go on, but for the sake of excess, it won’t.   The point is not that San Diego is a place to live frugally.  The point is that the price of gas doesn’t always paint the whole picture.

I’ve lived through 20+ Midwest winters, I know firsthand that there’s only so many hours in a day that you can be cooped up in the same household before you start to go a little Gary Busey. 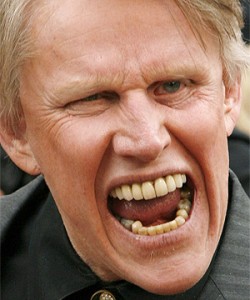 "Who wants to play another game of Scrabble?"

Separate from the cost of living, although still related, is the “cost of happiness”.  The cost of happiness factor is the amount of cash you spend in order to maintain a minimum threshold of joy in life.  It’s the money spent at the movie theater, sushi restaurant, vacation to San Diego, trips to the mall, season tickets to the Pacers, etc.

Of course people out here still go to the movies and eat sushi (fresher/cheaper sushi), but, there are a plethora of free options to replace each of these.  If money is an issue, the cost of happiness in San Diego is dirt cheap.

What’s your alternative to a day at the beach in September, a beach-side fire in January, frisbee golf in November, or the reduced urge to vacation year-round?  (I recently helped a guy at work who was on vacation…his home…Maui.)

The best things in life are free, you just have to head Southwest to find them…

There is no city more socially active than San Diego, California.

And keep in mind, this is coming from someone whose previous residence was considered a top 3 party school by Playboy.  The major difference between Madison, Wisconsin and San Diego is that Madisonians consider consumption to be their higher calling.  A byproduct of binging, however, is mandatory periods of downtime (typically Sunday & non-football Mondays).

Granted, San Diego doesn’t attack the bottle with the same tenacity as Badger Nation, but their frequency cannot be bested.  Most of the country uses Sunday as a time to do chores, read the newspaper, go to church, or whatever avenue leads to relaxation. Not here.  San Diego has invented the “Sunday Funday”, which basically amounts to afternoon drinking complimented with sports.  It’s justified because it rhymes (reason enough for me).  Using the local watering hole as your basis of measurement, you’d be clueless as to what day of the week it was.  Unlike baseball, San Diego takes no off-days (but participates in many double headers).

Also, the approachability of a San Diegon is uncanny.  This goes for non-native Southern California’ers as well as the indigenous.  Several times I’ve been in the situation where someone went from total stranger to revealing intimate details of their existence within minutes (not just the transients).  The only viable theory I can arrive at is that the sun cooks one’s brain into a permanent state of holistic comfort .  I’m confident science will confirm this soon.

And all of this is coming from someone who requires regular intervals of isolation.  Too much social activity causes the Good Badger to break out in involuntary fist flailing, crying, and rashes.  With that said, it’s nice not to let the calendar determine your social activity.  Whenever you want it, it’s available to you.

Reason # 3 – From Restless to Stressless

In all reality reasons 2 and 3 are two sides of the same coin (only this is invaluable).

A characteristic inherent to human beings is the ability to lose perspective.  We tend to stress ourselves out because our smart phones take too long to stream a video of a cat playing with an iPad.  We’ll sabotage our night because our boss used a less than favorable tone toward us at work (a manifestation of their own stress).  Then when the BBC runs a story about genocide in Africa, we quickly change the channel because we’d prefer to think that getting mustard on our pants is a bad day.

I’m not pointing any fingers here.  I am guilty of this to the greatest extreme.  I sweat the small stuff so often I own stock in Under Armour.

That is until I step outside.

A palm tree and ocean horizon have the ability to evaporate stress in such a way that cannot be properly placed into words.  When my work starts to feel like a chore instead of a passion, I relocate my office. 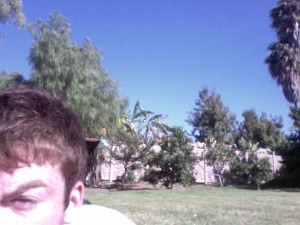 San Diego’s culture is widely regarded as being slow paced or laid-back.  To a Type-A, this is a cause for perpetual unease.  These are the very people who need to adopt some San Diego into their lives the most.  Ocean and sunshine are cheaper than Prozac and have none of its side effects, aside from being habit forming.

I hope that I was able to shed some new light on the brightest city in America.  Come sample a Costco size portion of San Diego, you’ll leave with a lifetime’s supply.