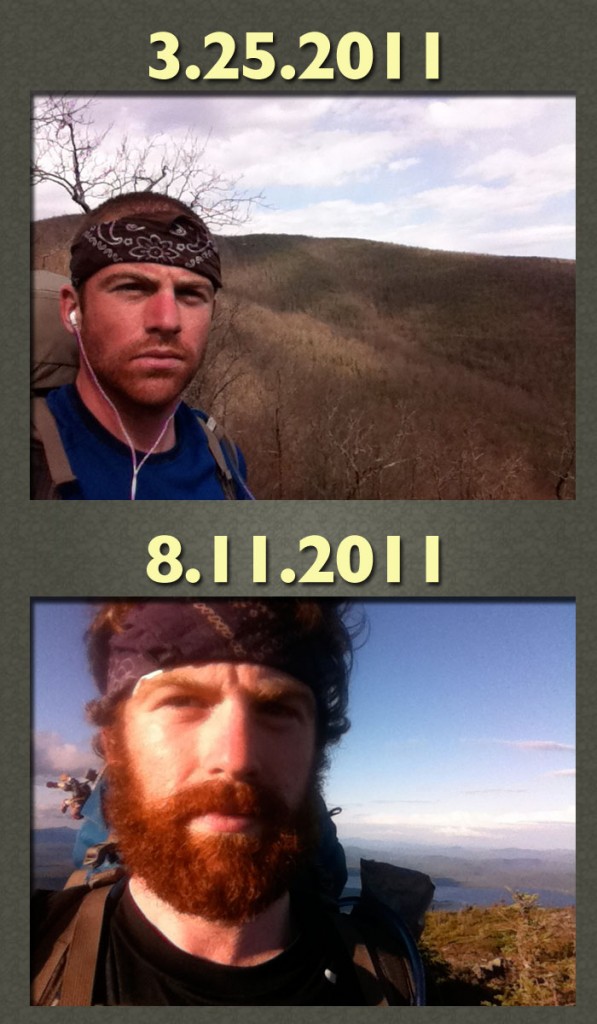 In the picture above, you are witness to what happens when a ginger head lays unattended for five months.  Despite it’s inherent ability to repel women, the beard will remain an indefinite resident of my face.

But that’s neither here nor there.

Over the past five months, I have done my best to paint you a picture of what life looks like on the Appalachian Trail- with words.  Today, I paint this picture with, well, pictures.

The video below highlights some of my favorite pictures taken over the course of my five months on the Appalachian Trail.  I’ve been off the trail for less than a week and this slideshow already makes me feel super nostalgic.  I’ve been told that the AT will leave a permanent emotional mark.  I’m starting to understand this first hand.

Luckily I can tell people the tears on my face are merely beads of reverse-gravity beard sweat.

1)  All of the pictures were taken with my iPhone 4

2) The songs in the video below, “The Day is Coming” and “Wonderful (The Way I Feel)” are from My Morning Jacket’s latest album Circuitular.  I listened to this album no fewer than 30 times, therefore it has a strong emotional connection to the trail for me – thus my reason for the selection.

3) I saw a total of one rainbow while on the trail (photo included in the video).  It just so happened to appear while I was listening to Radiohead’s album In Rainbows.  Coincidence?

4) The video is actually much closer to six minutes. I didn’t think that “Five Million Steps in Six Minutes,” had the same ring. No need to point this out.

Update: apparently YouTube is blocking the video because of the songs….trying Vimeo….stay posted.

Problem = resolved.  For anyone who’s interested, this is how you can legally bypass YouTube’s audio copyright block.

So, just a couple of days ago, August 22nd, 2011, exactly 5 months and 1 day from my start date, I completed my thru-hike of the Appalachian Trail.

There will be more reflection and insights on my merging back into your crazy indoor universe in posts to come, but as for right now, I need to get to something very important off my chest.

It’s nearly impossible to recall all of the acts of kindness I have been the recipient of over the last 5 months.  Friends, family, and strangers have been absurdly generous throughout this entire journey.   To a weary hiker, receiving a mail drop means much more than the cookies, whiskey, or baby wipes that lie inside.  It serves as a reminder of the people who care and are pulling for you to persevere.  I have been running on a fuel source compromised mostly of your love (and high fructose corn syrup).

And because of this, I want to say  THANK YOU.

The following list of thank you’s attempts to cover all of the individuals who have been instrumental in offering a hand along the way.

END_OF_DOCUMENT_TOKEN_TO_BE_REPLACED

Preamble: This post is both long and un-funny. I am taking a momentary lapse from humor to rant about a subject that I have spent much time consumed in the last 150 days or so. Despite what the proceeding post would imply, I still find fart jokes to be tremendously funny.

Although I joke about the profound truths that have found me along the trail, I have undeniably had moments of clarity. Moments where “life” seemed to make perfect sense.

In the process of being removed from the onslaught of media stimuli, the superficial concerns that plague much of society’s motives (status and appearance mean nothing out here), and the self induced stress that comes alongside a long work week that offers little to no sense of fulfillment- my eyes have been opened to a new “normal”. Currently, my days consist of: walking terrain that could be described as both tranquil and majestic, quiet moments of introspection, cracking jokes with other smelly hikers, and all the other daily human chores (pooping, eating, and sleeping). But of even greater importance than the new culture I have become a member of over the last four months, is the outside perspective I have gained of the society I have recently left behind.

To put it bluntly, there is a lot of bullshit permeating through our lives. Some “bullshit” (we’ll call negative emotions, energies, events, etc), is inescapable: disease, death, serious financial hardship. Most of this bullshit, however, is entirely artificial; of our own creation.

I want to talk about the artificial bullshit.

END_OF_DOCUMENT_TOKEN_TO_BE_REPLACED

I’ve received a few requests for an updated list of the gear that currently rides on Badger’s back.  This post is dedicated to you.  And whoever else may derive value out of it.

Instead of listing everything that I’m using, I will detail only the differences in gear from my original departure.