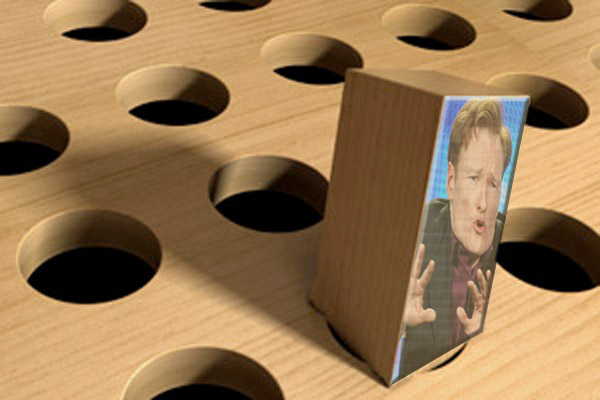 Please, correct me if I’m wrong, but am I the only person in America who fits these two conditions?

Throughout high school and college, I was as big a Conan fan as it got.  Late Night with Conan O’Brien was an oasis in the desert of horrible programming that accompanied midnight television (I’m coming from the perspective of Central Standard Time – deal with it).  At that hour your options are between infomercials for a toaster/blender/ChiaPet hybrid, some crazy evangelist preaching that masturbation is a sign of the devil, and Girls Gone Wild commercials (an unfair combination if you ask me).  And then there was NBC, the home of Conan O’Brien.  A safe bet for a couple of C level celebrity guests, laughably cheap sketches, and of course Conan’s razor sharp wit and immature, animated charisma.  I don’t think I missed a single Monday through Wednesday show throughout my entire freshman year of college (I had other priorities Thursday and Friday, and occasionally Wed…and Tues…and Monday.  Okay maybe I missed a few).  Prior to 12:05 AM, my roommate, we’ll call him Jason (because that’s his name), and I typically had separate agendas.  He was usually studying (no surprise he later went on to score in the 98th percentile for the MCATs), I, was usually not (no surprise I later went on to write a blog about watching Conan O’Brien).  But as soon as the famed Max Weinberg drum-roll hit, Jason put down his book, I put down the Playstation controller, and it was Conan time.  Our room eventually became the unofficial Conan viewing room, attracting others throughout Ogg dormatory (that was the actual size of the room to be shared by two people – and sickly, I miss it).

The point for this reminiscent rant, is to convey my affinity for Coco.

When, in 2004, NBC decided to make Conan the host of the Tonight Show 5 years down the road (way past the year 2000), no one was more excited than me.  This is mostly because I was moving to Pacific Standard Time and not sleeping in til 10AM anymore; 1:30 AM and I have drifted apart.  Last year, this long awaited dream finally came true.

I believe the Tonight Show + Conan experiment was a failure waiting to happen for two reasons:

The Tonight Show constituency in which Conan was going into had grown occustomed to Jay Leno for 17 years.  These two personalities could not further apart.  Conan is off-beat, intelligent, quick witted, interesting, etc.  Jay Leno, has none of these qualities.  Leno might excite you if  (a) you’re 60 years or older and/or (b) you’re only other hobby consists of watching paint dry.  Conan’s followers don’t meet this age requirement, so, unfortunately NBC misses out on the disproportionately large Baby Boomer population (when can we start referring to them as the Viagra generation? I believe I’ll start this now movement now).  Someone who had grown used to Jay Leno’s manila comedy and passive interview style was likely not going to jump on the bandwagon of, nipple rubbing, fake puppet string cutting, Conan O’Brien.  Additionally, Gen Y watches a good portion of their TV online.   Not good if you’re NBC and making a decision purely based on Nielsen ratings.

2)  When trying to please everyone, you appeal to no one

Conan was trying to please two different markets simultaneously.  His brand of humor was never going to stop appealing to his core audience (anyone under the age of 35), but it was obvious he now was also trying to please the older Tonight Show crowd.  If you paid attention, there have been several instances where Conan gets visibly uncomfortable when one of his guests brings up a “less than prime-time” topic during an interview.  Of course his interviewees would touch upon crude topics, they were talking to Conan.  His show used to be a breeding ground for such banter.  Now, since he’s the host of the Tonight Show, he has adopted the fallacy of the “Tonight Show legacy”.  Younger viewers don’t care about legacies.  Maybe those who are old enough to remember watching Johnny Carson care, but my generation doesn’t.  We don’t watch SNL because of what it used to be.  If it’s funny, we’ll watch.  If it’s not, the Internet, DVR, and Netflix puts the term “television legacy” on par with Alchemy.  In trying to cater to both of these audiences, he both missed the mark with the older generation and lost some of his luster with his original fan base.

Since Conan has found out that NBC is buying out his contract and releasing him, his show has started to return to form.  He even recently brought back our favorite self-pleasuring bear.  This is encouraging news for folks like myself.  Maybe the original Conan isn’t dead, but is merely lying dormant.  Put Conan into a setting where the lead-in is a half hour of animals viciously attacking people’s crotches (aka FOX), and I believe he can shine once again.

For those who feel bad for Conan, I have one word of advice: stop. Conan wasn’t right for the legacy.  Let the Johnny Carson/Jay Leno crowd have their old people’s program back.   NBC was trying to make Conan get behind the wheel of a classic Cadillac (or a Buick).  It didn’t work.  Now, once again, he has the opportunity to operate a monster truck that sprays licorice and nitrous oxide.  When Fox, FX, or some crazy alternative like Internet Television decides to give Conan his show back, his audience will be the beneficiaries.  After all, no matter how hard you try, you just can’t fit a square peg into a round hole.

About one year ago, one of the top stories in Major League Baseball involved the Los Angeles Dodgers offering Manny Rameriz $25 million for one year.  To play baseball.

That wasn’t the story. END_OF_DOCUMENT_TOKEN_TO_BE_REPLACED 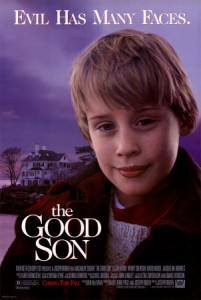 A couple of days ago I fell upon an article in the USA Today that was detailing the destruction caused by the unseasonably cold weather in the southern part of the country  (don’t be alarmed, this is not a weather rant).  Apparently, the plummeting temperatures has more of an effect than making Floridians dust off their winter jackets.  The article exemplifies some of the less obvious consequences of such an anomaly: large scale losses of tropical fish, the closing of zoos that stay open year round, etc.

Then, toward the end of the article, it is mentioned that two teens outside of Atlanta died as a result of this weather system.  What may have caused such a tragedy?  Perhaps their car broke down, they were stranded in the middle of a rural area, and eventually fell victim to hypothermia.  Or their car hit a patch of ice, they slid into the wetlands and promptly became hors d’oeuvres for a congregation of alligators.  In fact, neither of these scenarios were the cause of death.  Instead, as a result of recreation, these two teenage boys fell through a semi-frozen pond.

I don’t want to seem more cold hearted than I am in reality (68°F), but this is not an act of mother nature.  This is an act of neglect on behalf of their mothers.  In the Midwest, people die from similar events on a fairly regular basis.  No one makes this an issue of bizarre external factors.  People don’t blame Climate Change or write nasty letters to chemists, dealing a diatribe for the properties H2O.  Sure, ponds might not freeze as often in Georgia as they do in Minnesota, but when you put an ice tray in the freezer for 15 minutes, the result is partially frozen ice.  This is fairly universal.  When you pull out said ice tray, and a light bulb goes off saying, “if only there was more of this, I’d sure like to stand on it,” well, Darwin can explain the rest.

The older of the two kids was 15 years old.  True, this is young, but also old enough to be less than a year away from legally driving a two ton automobile at speeds heavily influenced by the NASCAR culture.  Still,  Mom and Dad have to take the heat (no pun intended) for this one.  Maybe these kids didn’t learn their “frozen pond lesson” from the The Good Son like the rest of us, but even if they had watched Macaulay Culkin chuck a child into the water of a semi-frozen pond, they’re just kids.  It’s their job to be curious.  It’s mom’s responsibility to say, “don’t play on that because you’ll die.”

Again, this doesn’t lessen the loss being experienced by those who knew and loved these kids.  Kids are kids, they didn’t deserve this fate.  The point is don’t tack this loss up to mother nature.  This one falls squarely on the shoulders of mom.

Thanks in advance to Tim Speciale for the picture.  Be sure to check out his website which houses the most interesting psychology facts and Facebook psychology studies that you’ve likely never heard of.

Don’t worry, this isn’t another Midwest weather rant.  Or is it?

I went back to the Midwest (voluntarily) again over New Years Eve. END_OF_DOCUMENT_TOKEN_TO_BE_REPLACED