One reoccurring theme on this site (other teaching you how to make your cat a celebrity) is an undying conviction that aligning your hobbies with your life’s work is the only way to live life.

But why take my word on it?  Instead take Matthew Inman’s.

For the few of you who aren’t already familiar with Inman’s immensely popular website The Oatmeal, I encourage you to dedicate a few hours to digging through his hilarious comics.  Formerly, just a skilled hobby of his, Inman now dedicates his full-time work towards The Oatmeal, and is thriving in his efforts.

A big thanks to Matt for taking the time to answer my questions.  Be sure to stop by his store and buy a bunch of stuff for all of your friends and family for Xmas and the rest of the lesser holidays.  Without further ado I now present you…

Oatview: An Interview with “The Oatmeal’s” Creator, Matthew Inman

the Good Badger: When those around me settle for mediocre, unfulfilling jobs in their in lives, involuntary rage is the default reaction. I’m a firm believer in turning your life’s passion into a career, regardless of how “silly” the idea might seem to someone else. There is no better case study for this ideal than your work at theoatmeal.com. I’m guessing you might have received some awkward stares when telling people that you planned on making cartoons about pig orgasms for a living. Now your site gets 5 million visitors a month (roughly 5 million more than thegoodbadger.com).  Although you’ve got us all laughing, the last laugh belongs to you.

However, your success is certainly attributable to more than witty comics and good fortune. Your extensive background in both web development and design is what makes The Oatmeal a viable option to you in the first place.

The question is (sorry for taking so long to get there): what sort of advice would you pass along to someone who has been “stuck” in an industry or career path that they desperately want to escape? What words of encouragement can you offer someone who might not have much, if any, background in their desired career path? How rewarding is to be a “one man operation” versus working for someone else?

Or, is it reality that most people are just S.O.L.? 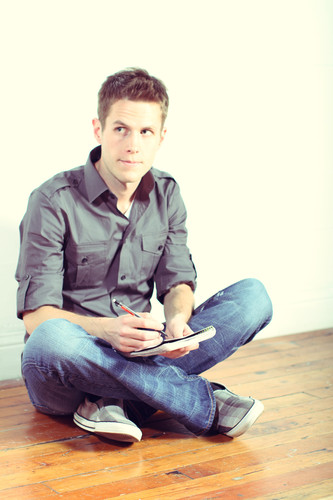 Matthew Inman:  My advice is to keep your day job, keep paying the bills, but tinker a lot in your spare time. For me, this kind of stuff has always been a hobby. At 13 I started tinkering with web design and development and 15 years later I’m still doing it. That’s roughly 15 years of practice in my career. It’d be like a 13 year old kid getting really interested in dental hygiene and studying up on cleaning teeth and the proper way to floss. By the time he was 28 he’d be like the emperor / Jesus / dark lord of dentistry. The lesson here is that if you want to get good at something, try to pick a career that’s in line with a hobby or passion. This will enable you to get off work from your day job to go “work” on whatever project you’ve got going on — be it a web site, radio controlled submarine, wedding photography business, or making underwear out of dead boars (Some people are into that.)

Also, try to keep your investment nice and light. The web in particular is a very good place to start lean, agile projects that don’t require a lot of time or effort to get rolling. Startups in the 90s had rows of offices filled with expensive Aeron chairs holding people with job titles like “content strategist webmaster” making 80k a year salaries while burning through mountains of VC cash. In 2010, startups have two guys working from their apartments on opposite ends of the world developing, launching, and selling applications overnight. The only requirement they need is a steady supply of caffeine and a working internet connection. You don’t need a lot of time or money to get something off the ground now, especially with rapid development frameworks out there (ruby on rails, cakephp, django, etc) and the accessibility of social networks to promote it (smearing your product all over facebook, twitter, etc).

Being a one-man operation is wonderful, although it’s got its drawbacks. I don’t have anyone to report to and there’s absolutely zero friction on anything I do — I can go from idea to launch in sometimes 30 minutes without having to call a meeting or any BS like that. Working at home, however, can be a bit trying at times. I’m three years in.

GB: What is your specific strategy in having your comics achieve viral success? At this point, within just an hour or two of being published, The Oatmeal, without fail, skyrockets to the top of social news sites such as Reddit and Digg (at least when Digg still worked) – reputation seems to do most of the leg work now. Before The Oatmeal gained a mass following, what “marketing” efforts have proven to be the most fruitful? What I’m trying to ask is, how can The Good Badger achieve mass viral success (without actually developing any marketable talent(s))?

MI: I get asked this a lot and the answer is always a disappointing one. If you want to get to the frontpage of digg or reddit, make things that people really like. My tactic for submitting to these sites is to copy/paste the URL into the input box and hit “submit” — that’s it.

I do, however, often pick subjects that everyone can relate to. Articulating a common gripe, talking about a childhood experience we all shared — such as eating play-doh or being disappointment by the flavor of Juicy Fruit gum, or being topical and making something about current events. Say something we’re all thinking but no one is putting it into the right words. Or just make something that’s really damn interesting.

GB: As a fellow recovering cereal-aholic, I know first hand the addictive qualities that brightly covered sugar flakes can possess. Specifically, what cereal proved to be your greatest vice?
MI: Tootie Frooties. They don’t make them anymore but they were the cheap kind of cereal that came in giant bags similar to this. My family was broke growing up so we ate tons of this stuff. Plus I was really fat and cereal was my solution to everything.

GB: You’ve got a quiz that can determine how long someone would survive while being tied to a bunk bed with a Velociraptor, another comic that gives the top 10 reason why it would rock to date a unicorn (from Mingle2.com), and another that shows how to go about naming an abortion clinic. You certainly don’t lack creativity. Do you have any rituals/practices that you follow order to get the creative juices flowing? Or does 7 reasons to keep your T-Rex off of crack just come to you when you wake up in the morning?

MI: I call it “brain farming.” First, pick a specific idea you want to work around, such as bunk beds, dating, or ctrl+z. Pick more nouns and connect them to that idea: bunk beds + raptor, dating + unicorns, ctrl+z + birth control. Think about it really hard, then go do something else. A few days later while you’re showering, gardening, shaving, exercising, or whatever, the idea will pop into your head and you’ll have it. I call it farming because you seed your brain with ideas and then a few days later your little creative crops start bearing fruit.

GB:  Are there any grand ambitions beyond theoatmeal.com? If Shit My Dad Says was turned into a network television show, anything less than a primetime Comedy Central cartoon is crime to society. Is there anything big in the works that fans of The Oatmeal can look forward to?

MI: My book is out March 1, and after that there’s a book tour. Beyond that, I’d eventually like to get into video. I’d like to do animated shorts, but it’s something I don’t have any experience in so I expect there will be quite a learning curve for me. I have no interest in a TV show that features me as a person, so whatever I end up doing will have more fat, bald, baby-like characters from the Oatmeal in animated form.

Again, thanks to Matthew for his time.  Seriously, go check out his site.