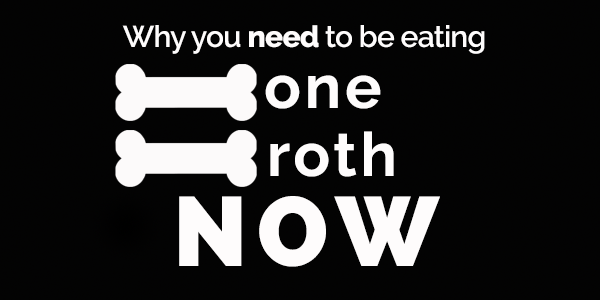 Why You Need to Be Eating Bone Broth Right Now

Primer: if you’d prefer a much more intellectual take on why bone broth needs to be in you, check out this Weston A Price article.  This article is a perfect representation of why I (instantly) bowed out from the health blogging game: it’s a crowded space, I don’t do original research, and quite frankly, I consume far too much whiskey to preach an ideal diet (old fashions are my life fuel).

That said, 18 months of obsessive research has equipped me with knowledge that has undoubtedly improved the quality of my life.  I’d like to share some of these insights which I feel are underserved in the mainstream.

This product exists, only it’s not a pill.  It’s not an ointment.  It’s not a nasal spray, suppository, or snake oil tincture.

Pound for pound, bone broth is one of the most nutritionally dense and restorative foods one can consume, and unfortunately, almost everyone indulging a SAD (standard American diet) is not.

The history of bone broth dates back to the 17th Century when a French health researcher by the name of Denis Papin discovered: “‘A jellye made of bones of beef’ was mentioned in the diary of Englishman John Evelyn (1620-1706) in 1682 when describing the results of a demonstration of the first pressure cooker.” (source)

It’s a staple in Chinese and Jewish Medicine, and is regularly consumed in several cultures around the world (Vietnamese eat the bajesus out of a bone broth based stew called Pho – pronounced “fa” because it gives pretentious people something to add to their arsenal of important facts).

It’s at the foundation of the GAPS diet, which Dr. Natasha Campbell-McBride developed to successfully reverse her son’s autism.

But if you’re like me, you give almost no shits about the history.  You don’t care if everyone on earth but you is eating it.  The question that matters: “Can it make me healthier?”

And you should be eating it now.  Like right now.

Bone broth is rich in several nutrients, minerals (including electrolytes), and amino acids- most notably glycine and proline- which both play a major role in a host of essential health functions.

At the height of my illness, I was accidentally exposed to bone broth in the form of my mother’s home cooked chicken soup (she uses the whole bird in the cooking process).  At the time, it didn’t matter what I ate, nothing satiated.  I could eat, and eat, and eat, and never achieve that Thanksgiving feeling.  One small bowl of this soup scratched an itch that I couldn’t find for the better part of nine months; my body was sending an unmistakable signal of “we need to do this more often.”  I have been making my own bone broth regularly ever since.

Let’s dig a bit deeper.  Below are 6 reasons you should be consuming bone broth right now.

This is a batch I made. It tastes better than it looks and smells, which isn’t saying a lot.

“The American researcher Francis Pottenger pointed out that as gelatin is a hydrophilic colloid, which means that it attracts and holds liquids, it facilitates digestion by attracting digestive juices to food in the gut. ” (source)

“Amino acids such as glycine, proline, and arginine all have anti-inflammatory effects. Arginine, for example, has been found to be particularly beneficial for the treatment of sepsis (whole-body inflammation).  Glycine also has calming effects, which may help you sleep better.” (source)

What this means to you:  Bone broth is rich in amino acids that are lacking in the SAD, many of which have shown to reduce inflammation.  You’re probably already aware that inflammation leads to joint stiffness and pain, but the impact is far deeper than just shitty knees.  Inflammation makes people depressed, and depressed people are inflamed.  Bone broth can help.

“Homemade bone broth soups are effective in restoring a healthy mucosal lining in the stomach. Bone broth is rich in collagen and gelatin, which have been shown to benefit people with ulcers. It’s also high in proline, a non-essential amino acid that is an important precursor for the formation of collagen.” (source)

What this means to you:  This goes beyond just pooping correctly (see #1).  “Gut health” will be a buzz word you’ll continue to hear over the coming years.  Science is just now beginning to understanding the impact our guts play on our overall well being.  An impaired gut has been linked to autoimmune disorders, skin disorders, a slew of psychological disorders, and more.  In other words, a healthy gut is really fucking important.  Bone broth can help.

“Collagen is a major component in hair growth, because it fights off free radicals that can affect your hair’s texture, growth and thickness. Restoring collagen in the hair shaft can improve hair growth. Collagen capsules strengthen hair and increase the diameter of individual hairs, giving your hair an overall fuller appearance.” (source)

What this means to you: Bone broth is rich in collagen and gelatin which support hair, skin and nail health.  Bone broth is good for vanity too.

“Bone broths provide the adrenal glands with the much needed nutritional support to help make the shift from survive to thrive. Dr. Shanahan even suggests that the nutritional matrix in bone broths may actually help patch the holes in the kidney tissue that cause the kidneys to function less optimally.” (source)

“Fish stock, according to traditional lore, helps boys grow up into strong men, makes childbirth easy and cures fatigue. ‘Fish broth will cure anything,’ is another South American proverb. Broth and soup made with fishheads and carcasses provide iodine and thyroid-strengthening substances.” (source)

What this means to you:  Odds are, if your energy is lacking, there is more than likely an issue with your adrenal system, thyroid, or both.  Bone broth can help

What this means to you:  Bone broth is rich in gelatin, along with calcium and magnesium, all of which play an important role in bone health.  Additionally, you should probably be supplementing with magnesium, as 57% of the population does not receive the RDA.

The positive health claims for bone broth go on and on, but if you’re not convinced at this point, there’s no convincing.

The skeptic might think some of the claims are hyperbolic- if not flat out lies. For the sake of argument, let’s say the skeptic is right.  Even if this is the case, there nutrient profile of eating head-to-toe is superior to what’s found in the muscle protein.  Tell me the last time you ate a fish eye, calf liver, or lamb tongue.  If you did, it was probably on a bet or a one-off thing (unless you’re a dad, because dads love liver. Basic dad science).

The less sexy way of looking at it: bone broth is highly nutrient dense (including those commonly lacking from the SAD), easy to make, and improves the taste of many basic recipes (cardboard chicken stock can suck it).

But the sexy view of the world is a much more exciting place to live.  And if it’s proven to heal people to the point of reversing autism, sign me the fuck up.

Want to learn how to make bone broth?  Check out this article.