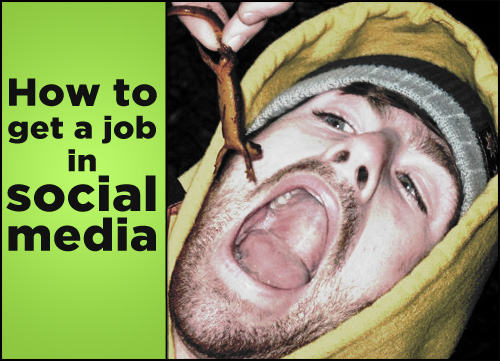 I recently received the below e-mail…

My name is Cletus Chud and I am a friend of Russel Rambcastle.

I spoke with Russel about how I am not really satisfied with my current job. I’m a sales rep for a company that sells paver stones to Home Depot in the Greater Atlanta Area.

I have always had a strong passion for social media. I feel that I have a good understanding of how it works and can benefit a business. My goal is to eventually quit my current job and begin by freelancing social media platforms for small businesses and work my way from there.

I checked out your websites and was extremely impressed with what I read and the video I watched about your book, “Appalachian Trials.”

I am a huge fan of Tim Ferriss and read his book “The 4-Hour Workweek.” I also noticed that he recommends your book and that you have interviewed him for Tech Cocktail! You and Tim Ferriss seem to have very similar personalities and lifestyles which is awesome.

I would be thrilled if you could give me any advice on my passion for social media and turning it in to a job. I feel like I am on the right track and just need to make the move. I look forward to hearing from you.

Because this is not the first time I have been asked this question, I figured it might benefit others to share my response publicly.

A couple of notes:

When it comes to getting a job in social media, there are more or less two aspects to focus on: your network and your social network.  Although it seems like there should be a lot of overlap between the two, this is not always the case (but if you’re good, it will be).

Quite simply the most important asset in your professional career is your network, which is the fancy way of saying, people you’ve shared an adult beverage with.

My first social media contract was from the referral of guy I interned for during my last year of college.  The amount of social media work I did for his startup was somewhere between very little and zero (mostly because “social media” hadn’t yet entered into the business lexicon – it was only Facebook).

I was recommended for the job because:

Now that I work in the slightly more grown up tech community, I still see the same pattern transpire.  People hire and recommend people that they know.  Building relationships with people is really important, and if done the right way, can be fun.  If you’re looking to get into social media (tech), start going to every single tech networking event you possibly can.  Shake hands.  Kiss babies.  Don’t worry about selling yourself, it’s more important for people to like you.

After meeting people, follow up with them.  Send an e-mail.  Follow on Twitter.  Friend on Facebook.  [Insert 21st century verb] on [insert social media platform].  If you had an especially thought provoking or valuable conversation with someone, take it up a notch.  Send them a letter.  Send them that book or DVD that you were referencing.

After the initial contact is where so many relationships die.  By going above and beyond what the other 99% do, you’ll live in their brains forever.  Or at least for another few months, which in the our ADHD generation, is way better than most.

A few months ago, I was interviewing the creator of an iPhone app for my job.  After publishing her article, she followed up by sending me a box of cookies, frosted with her brand’s logo.  She has since become a legitimate friend of mine.  That’s how shit gets done – and can be a lot of fun in the process.

Hiring someone for a sales job who has sales experience is a fairly straight forward task.  If you put up numbers, you’re good at sales.  If you didn’t, you aren’t.  In most cases, it’s that simple.

In a lot of ways, the same can be said for social media.  Do a noticeable amount of people pay attention and respond to what you say online?  If yes, you’re good at social media.  If no, you’re not (at least in the eyes of an employer – it’s very possible you have a great grasp on theory, but no one will know until you put it into practice).

If you’re looking to get a social media job, show employers that you’re good at social media.  Entire books have been written on the subject.  Some are good.  Most are quite bad.  Here’s a firestorm of my thoughts:

That’s generally sound advice, except for one thing: EVERY SINGLE GODDAMN PERSON DOES THE SAME GODDAMN SHIT.  The best advice I can give you is to think for yourself.  What is a unique trait about your personality that makes people like you?  Reflect that online.

Matthew Inman, the brains behind one of my favorite all time websites The Oatmeal, has 300K followers on Twitter and 650K Facebook Likes.  His social media presence is what you would call extremely fucking influential.  He also follows exactly zero of the traditional “social media rules”.  If someone says something slightly confrontational to him, instead of playing it off, or even trying to spin it into a neutral light (as many others will do), he will attack you (not all of the time, but often enough).

Inman is influential on social media because he’s good at life – in case you’re not familiar, he’s a cartoonist with a very popular website and book.  That’s the single most important key to being good at social media.  Be really, really, really, really good at what you do off of social media.  The top 5 Twitter accounts by followers: Lady Gaga, Justin Bieber, Katy Perry, Rihanna, and Brittany Spears.  Although you may be thinking “but Zach, none of the people you just listed are even remotely good at music except for Rihanna – and a couple of Lady Gaga’s jams are kinda catchy if you’re drunk,” you’re right, but enough people believe them to be good enough at their craft for our opinions to not matter.

From your standpoint, the best way to be good at life will most likely be a combination of growing your personal network (point #1) and having a website (or use a curation commentary service like Scoop.it) where you can further demonstrate your expertise (or passion/conversation fostering/etc).  Understanding the basic principles of how to use these platforms is fundamental, but likely isn’t going to be enough to stand out.  My best advice is to start consuming as much information on the topic of social media / marketing / pr / psychology as possible, and share your thoughts in whatever venue or format you feel most comfortable in.  But don’t lose your personality in the process.  There are too many sheep in the social media world.  It’s not necessary.

This e-mail is a tangential stream-of-consciousness rant.  I’m sure I forgot a lot.  That’s the best I can do at 11pm.  Consume this.  Let it stew in your brain for a bit.  Apply the principles that resonate.  And let me know if you’ve had any success.

Also don’t hesitate to reach out if you have any questions.  I’m not always fast to respond, but I respond.

Best of luck to you,

Okay maybe changing my name was a tad excessive, especially considering it’s built into the URL.  But who in their right mind wouldn’t take career advice from a guy named Zammersamples?

With a cabin full of hugs,