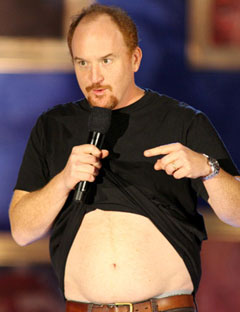 Louis C.K. is a comedian that you may not be familiar with.  On a scale from 1-10, his popularity is roughly a 7.5 (and on the rise).  He’s had an hour long special on HBO, another on Showtime, an HBO sitcom (that was canceled after one season), a new series about to debut on FX, and the first ever stand-up special accepted by Sundance.  Not too shabby.

I first fell upon Louis C.K.’s stand up during his hour long special on HBO.  It was nothing short of magical.

An average stand up routine will typically rouse a couple of chuckles, but I’m onto the next channel within the first few minutes.  A good stand up routine will keep my attention throughout the entire performance, with consistent levels of laughter.  During Louis C.K.’s stand up, I developed a laughter induced hernia, 1-hour of comedy turned into 3 hours of total watch time due to constant rewinding from residual laughter drowning out proceeding jokes, and several pieces of furniture were destroyed in the process (I’m a violent laugher).

As intense an experience as this was, it still wasn’t enough to become hooked.  There is so much quality entertainment available, simply being great is rarely enough anymore.  It’s not uncommon to discover a stand-up comedian I enjoy via Comedy Central, HBO, Showtime, etc.  I need more than one good stand-up bit before making grandiose judgments of their caliber.  There’s a difference between a great stand-up comedian and having a great stand-up routine.  As much as I love Jim Gaffigan, he’s been recycling the same hot pocket joke for years.  Raise the bar, Jimmy.

So what, I can watch a few stand up comedian’s videos online, why should I care when I could be watching a Hannah Montona concert instead.  No doubt, Montana’s (or Hanny as we refer to her in the fan club) music is infallible, but a hand held digital camera’s feed from the 9th tier of a sold out super arena makes for less than stellar content.

Louis C.K.’s videos are all of the, non-bootlegged, watchable variety.  In other words, he’s fully aware, and compliant, with the documentation of his act (confirmed by the library of videos available to stream on his website).  If he wanted to, he could have the dozens of clips uploaded by random users on YouTube taken down faster than Michael Johnson versus Mike Tyson.  All signs point to Louis’ full participation in his content being given away.

But isn’t it bad business to give away something you could easily charge for?  Walk into Panera, insist on the “free sandwhich”, and time how long it takes before someone spits in your face.  I’ll save you the hassle, it’s 8 seconds.

The difference between stand up and sandwiches

So what is the inherent difference between stand up comedy and a sandwich?  They’re both something of value- people will pay for it.

In his book Free: The Future of a Radical Price , Chris Anderson explains the concept of marginal cost, and it’s relation to economics on the Internet.  The tangible costs related to a YouTube video- the camera, tripod, ticket to the show- are all fixed costs.  From the user’s standpoint the expense of getting the video out to one person is the same as 10 million people (in scenarios where the user pays for bandwidth, the marginal cost is low enough to be insignificant).

The sandwich on the other hand, has a substantial marginal cost.  Every sandwich has material value (with exception of Jack in the Box).  Giving away goods with a high marginal cost is not a good business model.

The economics of the Internet are centered around free.  Anything that can be digitized is available to you, whether you know it or not.  Demanding payment from a new customer/user/fan is the fastest path toward obscurity.  Consumers demand that you prove your worth prior to them opening their wallet.  Free content has replaced advertising as the most effective form of marketing.

Today we can get content for free that we were paying a premium for just a few years ago.  Music, TV shows, newspaper articles, guitar lessons, even Stanford lectures are being given away.  Anything that can be digitized is either freely available, or soon will be.

If you’re in the business of digitized content (which encompasses more businesses than you might image), how are you supposed to make any money?  Sure you could attempt the Radiohead pay-as-you-please model, but not every brand has such a passionate, and more importantly, large, following.

When Louis C.K. gives away stand up for nothing, he’s not really getting nothing in return.  His top 10 most watched YouTube videos have resulted in over 12 million views.  An old business model advocate is furious because 12 million times someone got for free something they could have charged for.  The new business model proponent realizes the power of such exposure.  Even if only 1% of those 12 million views turn into loyal fans, that’s 120,000 more on the Louis C.K. bandwagon.

And when it finally comes time to charge for the things that can’t be digitized, the experiences that you don’t get from a YouTube clip, a live performance in the local venue with a group friends who share your excitement, that’s when it’s time to cash in.

In Louis’ own words, he’s uncomfortable with how much charges for a ticket to his show now (You only need to watch for about 5 seconds, although the entire interview is very good):

Louis, don’t feel bad for charging as much as you do.  If people are willing to pay, it’s not too much.  It’s supply and demand.  It’s free-conomics.  It’s what happens when you give away great content and ask for nothing in return.

Free can pay big dividends in the end.

Watch for Louis’ new series, Louie, on FX this June.